Most current financial models are based on the assumption that risk is created by an outside natural or man-made disaster – what many would call an “act of God” and which economists call an exogenous shock.

The SRC believes, however, that risk within the financial system is created by people interacting with each other. This is known as endogenous risk, which comes from the ancient Greek words for “growing” and “within”.

The term endogenous risk was first coined by researchers at the LSE in a research article published more than a decade ago, and the theory of endogenous risk is the guiding philosophy of the SRC.

It is based on the idea that everything that takes place in a financial system is caused by the interaction of all the players in the market, whether financial institutions, traders, regulators or policymakers, who are all pursuing their own objectives.

Most of the time, these individual economic agents behave in a way that cancels out shocks. For example, the same event may prompt some to buy an asset and others to sell it.

Systemic risk is realised when this no longer happens because the agents start behaving in a harmonious way; the distress of one agent triggers behaviour that causes distress in other agents, who then further spread trouble. In other words, individual economic agents react to some particular event, and their actions in turn affect their environment through a network of feedback loops and mechanisms. Endogenous feedback between the behaviour of market participants can suddenly and unexpectedly create a vicious cycle, causing a crisis.

The London Millennium Footbridge, a steel suspension bridge opened on 19 June 2000, had to be closed two days later after pedestrians suffered from an unexpected and significant swaying motion that caused it to be nicknamed the “wobbly bridge”. Although the bridge had undergone tests, it turned out the natural motion of people crossing the bridge caused minor moves in the bridge that led all walkers to adjust their stance at the same time. This created a feedback loop as the swaying motion increased and people adjusted their stance more drastically. This is an example of an endogenous response created by and amplified within the system. 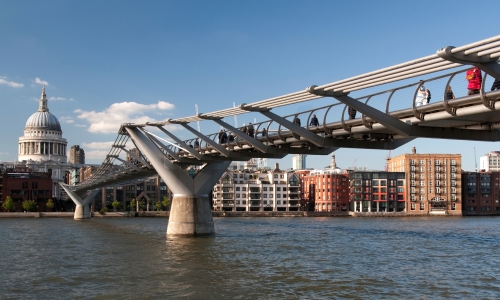 Financial markets are the supreme example of an environment in which individuals quickly react to what is happening around them, but by doing so both create and amplify systemic risk.

The SRC believes therefore that it is the feedback loops and amplification mechanisms, and not the triggers themselves, that are important. This is because, as with the Millennium Bridge, it can be extremely minor or even invisible actions arising from within the system that are amplified into huge crises.

The idea that systemic risk and endogenous risk are subject to feedback loops and the law of unintended consequences highlights the need for better understanding between the various disciplines that are involved in financial markets and financial regulation. It is crucial to avoid taking a narrow academic viewpoint that focuses on only one research domain.

We believe that endogenous risk, and its contribution to systemic risk, cannot be properly understood without jointly considering financial, political, legal and technological factors. The SRC’s research draws on decision sciences, sociology, evolutionary biology, political economy and computer science, in addition to our core areas of finance, statistics and economics.

Aims of this research strand

SRC researchers will work to expand the knowledge of and findings on the nature, origins and impacts of endogenous risk in financial systems. This will lead to a greater understanding of how financial models should incorporate endogenous risk.